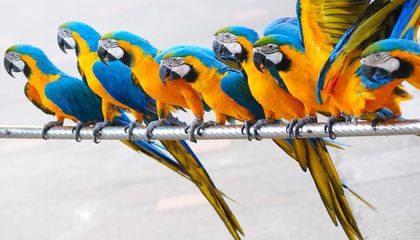 I first came across the term, Parrot Head, four years ago when my husband and I moved to Killington, Vermont. I was waiting tables at Casey’s Caboose when I met my first Parrot Head. The bartender had just returned for the winter season and was relating her most recent adventures in Margaritaville.

The term, Parrot Head, may cause some confusion. You may be wondering if Parrot Heads are a tropical version of Dead Heads. In many respects they are distant cousins. Parrot Heads are fans of Jimmy Buffett. Jimmy Buffett is a popular folk singer. He began recording under his own name in 1970. Buffett has remained popular for the last twenty-seven years and in that time has recorded twenty-four albums, written two fictional books, two children’s books in conjunction with his daughter and the score for a musical. He is best known for his 1977 hit song “Margaritaville,” which has become the Parrot Head national anthem.

Buffett is considered the poet laureate of Florida hedonism. Webster’s Dictionary defines hedonism as a doctrine in which pleasure or happiness is the sole or chief good in life. Webster’s Dictionary also considers hedonism a way of life based upon the principles listed previously. Buffett defines this lifestyle for his fans. Buffett defines hedonism through his music. Many of the songs are semi-autobiographical. In some cases Buffett is telling a story that someone else has shared with him. Buffett tells stories describing life in the Keys. The songs cover topics such as the antics of tourists, his relationships with friends and family, and the adventures he has had living and traveling in the Caribbean.

Parrot Heads are not always easily recognizable. The majority of Buffett fans live ordinary lives. They come from many different backgrounds and range in age from sixteen-to-sixty-five. However, when Buffett tours in concert, the Parrot Heads begin to “phlock.” 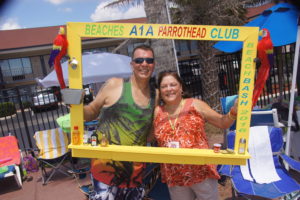 A Buffett concert is similar to a miniature Mardi Gras. Everyone wears a costume. There is no official Parrot Head dress code. The fans have proudly taken tastelessness to the absolute limit. The most common features of their wardrobe consist of Hawaiian shirts and leis. However, they can be seen wearing hats shaped like parrots, fins, beer steins, lobsters and fish. This outrageous attire is usually only worn at concerts or other Buffett related events. Wearing an outlandish costume is a way for the fans to escape their daily working routine. By donning a costume they are able to partake, for a few short hours, of lifestyle that they fantasize.

Parrot Heads have a distinctive diet. Their diet is defined by the songs Buffett has written about food. Their principal source of nutrition is a cheeseburger. The beverage of choice is a margarita, but other boat drinks can be substituted. Most of the drinks are made with rum. Fans share information about what the best boat drinks are and how to make them, where to find the best cheeseburgers across the country and how to cure tequila -induced hangovers. A steady trade in bootleg tapes is also rampant.

Parrot Heads have their own language which can only be deciphered after repeated exposure to Buffett’s music. Many of the titles of songs have been reduced to abbreviations. To the outsider SOASOAS, OPH, and CIACIL are utter nonsense. However, a Parrot Head knows that these abbreviations all represent the title songs of the albums, Son of a Son of a Sailor, One Particular Harbor and Changes in Attitudes, Changes in Latitudes. Fans repeatedly refer to Bubba, which is Buffett’s nickname. This is the name of a club that he once played. Parrot Heads will frequently add a “ph” to the beginning of words. This is an abbreviation of Parrot Head, which shortens references such as Parrot Head friends, Parrot Head flocking and Parrot Head festivities to phriends, phlocking, and phestivities.

Fans are able to communicate to one another via a variety of electronic newsletters such as the Coconut Modem. Buffett sponsors his own newsletter called the Coconut Telegraph. This is the only official Buffett newsletter. Many fan clubs put out their own newsletter detailing their activities and events happening in the region. The newsletters also address issues such as old versus new music and whether or not Buffett has sold out to the music industry.

The newsletters also carry stories about subscribers’ experiences at Buffett concerts. The Church of Buffett, Orthodox and the Lost Troubadour Society are both clubs that cater to the older fans. These clubs where born, because a number of the older fans do not care for Buffett’s newer music. The goal of organizations like these is to let Buffett know of their dislike of his new music in the hopes that he will return to his roots. There are several fan clubs that are nationally recognized. The Parrot Head Club, which is a regional organization and Parrot Heads in Paradise, which networks these smaller organizations are both non-profit. These clubs are service oriented. They are primarily concerned with environmental and community issues. Many of the clubs are involved in organizations such as the Save the Manatee Club, Memory Walk for Alzheimer’s and the World Parrot Trust. The clubs also provide a variety of social activities which the members may participate in. Club members are able to purchase group concert tickets through Buffett’s management. However, they are required to provide a minimum level of community service throughout the year in order to receive this benefit. 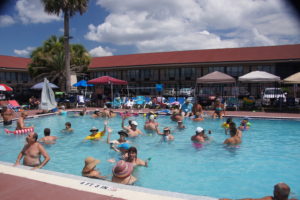 The membership of these clubs consists primarily of middle-class, Caucasians between the ages of twenty-five and fifty-five. Buffett has a variety of different types of fans. The majority of his fans lives an ordinary life and use the concerts as a way in which stress and pressure can be released. For a brief period they can pretend to live an exotic, carefree lifestyle. Buffett represents a way of living that they are unable to pursue. He symbolizes a way of living in which each moment is lived to its fullest without worrying what tomorrow will bring. Most of his fans assume this identity to forget about their daily lives for a few hours. The concerts give fans a chance to let loose without fearing the social repercussions. Their identity is lost in the throng. The younger segment of Buffett fans cannot really be considered Parrot Heads, because they attend the concerts for the carnival atmosphere. They are there to party. The music is secondary to the celebration. The third group of Buffet fans is composed of those rare individuals that are able to live the life that Buffett sings of. This group of fans is composed of people that have left behind the daily grind and all its hassles and benefits for the uncertainty of living day-to-day. They are found in resort areas teaching sailing, guiding fishing boats and tending bar.

Buffett has an extremely unique relationship with his fans. He cannot be called a popular artist yet he is extremely successful. Buffett has had only one top ten hit yet each summer all of his concerts sell out. One of the reasons behind his success is that Buffett is aware of the audience. “My career’s always been built around a relationship with the audience” said Buffett (Genz 7). Buffett’s concerts are very interactive. The audience is invited to join in the singing and members of the audience are often invited on stage to share their talents. Stories float around about how Buffett was at some bar and shared a few of his songs with the audience. Fans visit bars he is known to frequent in hopes that he will show. Fans share their experiences that revolve around Buffett or the island lifestyle he sings about. These experiences are continuously retold. 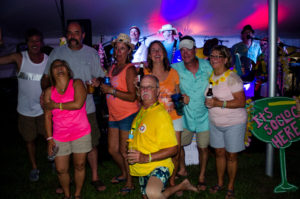 There are three main variations in the types of experiences fans share. These variations can be categorized as insight, escape or hero worship. The most common experience that fans share, describes how they met Buffett or met their spouse/significant other at a Buffett concert. The second type of experience that fans share, details their escape from society. This style of writing reflects Buffet’s short stories. Often the experience involves taking a road trip to the Florida Keys or some other tropical paradise. The third type of fan writing shares experiences that confirm an idea or concept expressed in one of Buffett’s songs. One story found in the Coconut Modem describes a nurse’s experience while driving home from a Buffett concert. An accident occurred and the nurse stopped to help. The victim died in the nurse’s arms. She summarized her story by writing “In the words of Jimmy Buffett, we realized ‘Life is just a tire swing, but the rope may break at any minute.'” I feel that this is the most illuminating variety of fan writing. The fans are able to apply Buffett’s words to an experience and bring some order and meaning away.

I feel that Parrot Heads do constitute a subculture. The culture is not very apparent the majority of the time, because the fans do not normally appear significantly different from the average person. Parrot Heads can usually only be spotted at concerts. A Buffett concert signals the fans to don their plumage and announce their presence. If this was the only time that Parrot Heads ever got together, then their status as a subculture could be questioned. However, the number of years Buffett has been able to maintain a following suggests otherwise. Parrot Heads are not as easily spotted, but once they have been discovered they are hard to miss. The biggest factor that contributes to Parrot Heads as a subculture is the manner in which the group uses the media. Fans find a portion of the Buffett repertoire that they can connect to and they apply that to their own lives. Fans will rewrite the stories that Buffett tells with themselves as the main characters. They also try to live these stories by visiting the places mentioned in the songs. This gives the fans a new perspective. The fans feel the need to form a subculture, because it fulfills a need within their lives. I believe Parrot Heads have formed a subculture because it allows them to escape their working routine. The music can change the atmosphere of a room from drab and gloomy to festive and gay. In some respects I have lived the lifestyle that Buffett sings about. There are days I really miss the freedom from responsibilities that living for the moment brought. Whenever I start to think about returning to that lifestyle I play a little Buffett music. The music transports me and after a while I am ready to return to my routine.

Buffett fulfills a need in people’s lives. Some people need to escape their daily routine so that they can return to work with a fresh attitude.

One thought on “What is a Parrothead?”